I only have one sister (whom I love dearly). Yep, just the two of us﻿! No brothers!
Now you're probably wondering if my husband, Scott, came from a big family? Nope! He has just one sister also. So how did we end up as a mega-family? Well,.... that's a post for another day! :)
Anyway, as I was saying writing, I don't have any brothers. So before Scott and I had any kids, I told him that I would be perfectly happy with a house of daughters! I didn't think I was at ALL prepared to raise sons!
Our first child? A son! I was more than a little nervous to enter this foreign land of male. Fast forward almost 18 years later, I not only have one son, I have FIVE!!
But I shouldn't have worried! God knew exactly what He was doing (of course!)! I love baseball, I can hold my own in a Nerf battle or a round of Super Smash Bros. Melee, and an active game of balloon volleyball? I'm there! :)
So, when my son, Seth, told me that his Bible project was on mummies, it was time to come up with a boy-pleasing presentation! (I hope this isn't too graphic for anybody! Those with sons or mummy projects will hopefully appreciate it!)
First, we made our guy to be mummified: 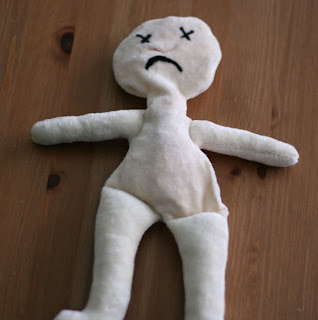 Love the unhappy face drawn by Seth! :)
What did they do to prepare a guy? Well, they removed the brain out their nose (disgusting, but true): We made sure our guy had a nose opening for presenting.
Ewww? Totally!
Here he is with his "brain", made from strips of fabric, randomly stitched together: 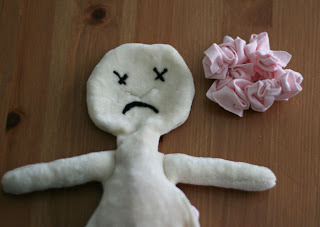 I'd look unhappy too! :)
Next, they would remove the organs: 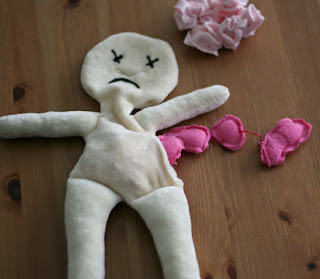 I sewed up the "organs" that Seth designed and connected them for easy removal.
Then, came the intestines: 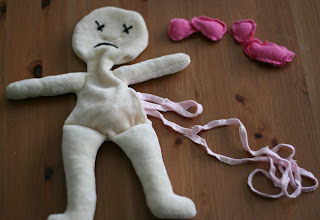 Disgusting? Totally! You feeling the boy-ness? :)
And here's the total project: 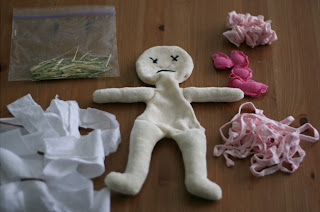 Guy, innards, bag of straw to stuff him with (ok, hay, but that's all we had with a pet bunny!), and strips of cloth to wrap him in!
Seth can't wait to present his project!
And for me? Any further desire for a house of just girls? Not for a second! :)
Posted by Misty at 11:48 AM

A blog all about raising a large family and the crafting and sewing done in between.

Misty
Married to my best friend, mom to fourteen wonderful blessings, with a fifteenth joining us from China. Yes, they are all mine! :)

I would love for you to join me